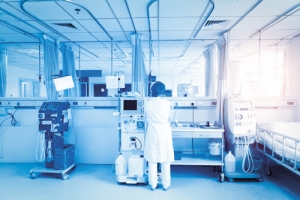 Every device needs to work seamlessly in its operating environment. But when that environment is a human body, things get complicated.

Our bodies are complex and unique systems where the safety and longevity of any medical device must be guaranteed. That’s why we need to integrate modelling and simulation when designing and developing today’s medical devices, to not only help us expedite their time to market, but also effectively personalise such devices and the treatments they can administer.

Thierry Marchal, global industry director of healthcare, sports, construction and consumer products at Ansys, said: ‘Human variability is a huge challenge for the healthcare industry. Clinical testing is only conducted on a few thousand patients at most, but when these medical devices go to market, they’re available for potentially billions of patients. The sample of people used in a clinical trial is therefore just a model of the entire population and, like any model, it has its limitations, and it often happens that despite a successful clinical trial, the treatment will fail, or worse deteriorate the condition of the patient.’

As a result, we need to complement traditional in vivo testing (such as testing on a living animal or human) or in vitro testing (testing performed on the bench) with a new approach, which is commonly called an ‘in silico’ trial. In silico simply references the silicon chips needed to run the necessary computer simulations and models that are now increasingly used to help develop our medical devices.

By using an in silico approach, trial times can be reduced significantly to deliver cutting-edge devices to patients, a critical factor for the healthcare industry.

During a speech at the European Parliament in September last year, Michael Hill, VP of R&D at Medtronic, claimed that using computer models to get one of its new pacemakers approved allowed them to release the product two years in advance, giving them the opportunity to treat 10,000 patients during these two years and saving $10m by reducing the number of patients involved in clinical trial by 256.

In silico technologies also pave the way for a more personalised healthcare system. Marchal said: ‘Testing any medical device on a virtual human, or digital twin, can be done very early in the product development process without the need for formal approval, contrary to any in vivo testing or the need to create a physical prototype. Testing a concept early gives the designers more freedom to adjust the design, boost the performance and minimise the risk of failure during its lifecycle.

‘This approach is also more ethical, as most products are extensively tested on a computer with great reliability, rather than taking the risk to injure an animal or a person during a clinical trial,’ Marchal added.

‘Current generations of medical devices are relatively simple, largely due to the difficulty developing and testing complex devices. Bench testing and animal models have limited use when human behaviour is involved, while actual testing on humans through clinical trials is expensive,’ Levine said.

As a result, only a limited range of capabilities can be effectively developed and validated by the regulatory agencies. However, modelling and simulation can create virtual patients for in silico clinical trials with unlimited variability and costs, according to Levine, who said: ‘These patients can be used time and time again, replicating more and more sophisticated human behaviour, allowing development and testing of smarter devices that work more harmoniously with the human body.’

Levine added: ‘Doing experimentation in the virtual world, the most creative designs can be explored and tested in ways that could never be done using physical testing.’

For example, any medical device or product that will be embedded in a human body must be tested for MRI safety. Levine explained: ‘This is now routinely done with simulated patients and the data produced is acceptable to the regulatory agencies. Digital twins representing entire populations are being built that will reduce the time and cost of clinical trials, resulting in more personalised treatments.

‘One day, all medical devices will be fitted to the individual considering not only their physical condition, but also their age, gender, race and genomic profile. This can only be achieved through developing digital twins of patients, by using their electronic medical record and data gathered using mobile health monitoring devices. We call that a 3Dexperience twin,’ Levine added.

Dassault Systèmes has started to work with the FDA to perform the first in silico clinical trial using a set of cardiovascular virtual patients. This work is based on its model developed for the company’s Living Heart Project, which is on a mission to develop and validate highly accurate, personalised digital human heart models.

Not all medical devices exist in the human body. Altair has worked on multiple orthotics, prosthetics, orthopaedic implants and coronary stent projects with its customers.

In a recent collaboration with Medtronic, Altair developed a simulation-led process to produce better performing stents, bringing them to market faster than previously possible. This allowed Medtronic to perform assessments on 60 design variations in a single night, a significant improvement over the previous process which had taken several days to generate the same result. Using optimisation also allowed for the fast identification of the best performing design variant, with huge gains in product performance.

Sam Mahalingam, CTO at Altair, said: ‘Whether a device is an external brace (orthotic), replacing a missing body part (prosthetic) or supporting a bone (orthopaedic implant), a low material mass solution is a priority. The use of optimisation enables metal and plastic devices to be lightweight and feel natural to the patient.’

Mahalingam added: ‘The use of topology optimisation creates designs that are both lightweight and organic in their form. In the case of orthopaedic implant, this isn’t just an aesthetic benefit, it is helpful to the processes of osseointegration, the adherence between the living bone and the surface of the metallic implant.’

Polymer solutions firm Nolato Medical Solutions has worked with Altair and other partners to develop a multi-use auto-injector pen, using a range of different simulation techniques. After simulations were completed on the component level, the assembly for the pen was simulated.

Kristoffer Glowacki, vice president of strategic development and technology at Nolato, explained: ‘We then ended up at the complete product level, but this time we included the process history in the simulation models. With this virtual prototype, we were able to test product requirements and ensure that all specifications were fulfilled.’

The primary benefit of simulation in this project was that the simulation results drove the design work, according to Glowacki, who added: ‘During simulations on all levels, we gained a deeper insight into all aspects of the design and requirements. Now we can test many design solutions, which would have been impossible without simulation tools. We can also virtually test all requirements before we have physical prototypes. This saves time and sets the foundation for a robust design.’

Simulation is also aiding the development of autonomous medical devices, such as glucose sensors for diabetic insulin pumps. Marchal explained: ‘By modelling the pump and creating a digital twin of the patient’s body, the pump is able to automatically administer the medicine without a patient or the doctor having to step in.’

Marchal added: ‘Simulation also helps maximise patient safety by modelling and predicting the behaviour of the device and its embedded software for various scenarios, therefore, minimising risk of an inadequate response from the system in extreme situations.’

But we need to collect more medical data to fuel automation and AI further, which is where the increased adoption of IoT-enabled wearables could help, allowing clinicians to ‘more fully realise the potential of machine learning in the healthcare industry,’ said Mahalingam.

There is no mistake that artificial intelligence will help us better design devices for our human bodies, as Levine concluded: ‘Over time, AI will become an invaluable tool throughout the medical device value chain as the quality of the data improves.

‘Today, the reliability is limited, since the data is not well-curated, but the use of automation will result in more consistent data, and therefore better training sets for AI.’

The software takes a colour fundus image of the retina and outputs three core components: a quality assessment of the image, heatmaps to indicate potentially abnormal areas related to AMR and DR, and scores related to the likelihood of each of these diseases.

For the image quality assessment, the RetCAD models have been trained using tens of thousands of images. Mark van Grinsven, head of development RetCAD, explained: ‘It’s important to use a very diverse dataset, including the different ethnicity of the patients and to take into account the differences in the images coming from different colour fundus camera brands. You want your system to be able to handle all images from the different sources at the same time, and in the same fashion. The models must be trained to take into account all sorts of characteristics – that’s a key challenge.’

The heatmaps are used as a visual aid when the AMD or DR scores are high, so that the clinician can check where the abnormalities are present in the image. Combined with the image quality assessment, this helps the clinician to decide whether the patient should undergo further testing for the presence of AMD or DR.

RetCAD is based on a class of deep neural networks called convolutional neural networks. Thirona used some off-the-shelf models when it developed RetCAD but also developed its own models to tailor the software to the tasks it needs to undertake. ‘The models are trained on graphical processing units because of the complexities of the calculations,’ Grinsven added.

RetCAD is camera agnostic and has been available since 2017, but a recent partnership with Topcon Healthcare Solutions means the solution is now available across Europe in the Harmony Referral System eye care platform. The software not only expedites a diagnosis for patients but also helps clinicians analysing these images, so they can spend more time with the patient.

Thirona is now working on training its models to detect other retinal diseases, including glaucoma and cataracts, and wants to extend its reach outside of Europe. The company also applies its AI-driven approach to thoracic CT-scans and thorax imaging.

This website uses cookies to improve your experience while you navigate through the website. Out of these, the cookies that are categorized as necessary are stored on your browser as they are essential for the working of basic functionalities of the website. We also use third-party cookies that help us analyze and understand how you use this website. These cookies will be stored in your browser only with your consent. You also have the option to opt-out of these cookies. But opting out of some of these cookies may affect your browsing experience.
Necessary Always Enabled
Necessary cookies are absolutely essential for the website to function properly. These cookies ensure basic functionalities and security features of the website, anonymously.
Performance
Performance cookies are used to understand and analyze the key performance indexes of the website which helps in delivering a better user experience for the visitors.
Analytics
Analytical cookies are used to understand how visitors interact with the website. These cookies help provide information on metrics the number of visitors, bounce rate, traffic source, etc.
Advertisement
Advertisement cookies are used to provide visitors with relevant ads and marketing campaigns. These cookies track visitors across websites and collect information to provide customized ads.
Others
Other uncategorized cookies are those that are being analyzed and have not been classified into a category as yet.
SAVE & ACCEPT
Powered by